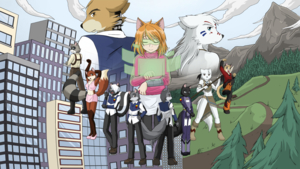 Opposing Sides - Full Image
by Kurapika
JournalsSee All
Dog Getting Leg Amputated
As you may or may not have noticed, I have been unable to upload pages the last couple of days, and for those of you who know me a little better I have been very difficult to get hold of to talk to. T...
6 years, 9 months ago
Gallery Update
Soooo as mentioned in the uploads life has been a pain hectic and unkind to me lately, I will not bore you with the long list of details and simple explain that because of those complications I have b...
6 years, 10 months ago
Comic Releases are Behind
Very sorry about the lack of updates. My health has not been the best, so I have been only been able to focus updates to Tapastic for a while. Then a few days ago I started falling behind on new pages...
6 years, 10 months ago
show original thumbnails
GallerySee All

Commission - What if?
See More in Gallery
PoolsSubmissions grouped togetherSee All

Art from Patreon (often 18+)
For the art I do for my patreon users that don't mine their requests and commissions being shared.
14 submissions
See More in Pools
FavoritesSee All

The Heart Breakers
by ShaneFrost

First steps with SAI
by AirBlade

The Garden That Did Not Exist
by ShaneFrost

Tales by Firelight
by Dreamkeepers


Lorewalker Cho
by Lando
See More in Favorites
Profile
I write and draw because I have a story to tell, and like it when people take the time to read or look over and enjoy my stories and art, I also hope one day, I can publish my work.

I may have to warn you though I am dyslexic so some words or sentences my be hard to read because of it, I do my best to catch these mistakes though and go through my work constantly to catch them as best as I can, if you find anything wrong don't hesitate to tell me so. I really do the best I can to fix that problem but I'm never able to catch it all.

I right now divide my time between my writing and my drawing. It can sometimes be very frustrating as I love writing more than I do drawing, but my drawing is much more in demand then my writing, so I'm often spending more time on drawing when I would rather be writing another chapter to one of my stories.

About me, well, due to a chronic illness (an auto immune disorder) I spend most of my time at home, often sick or in bed, and I am confined to a wheelchair when I would like to get out of the house on my own. When I'm not sick I'm usually writing or drawing, so as you can imagine, I have too much time on my hands... which explains the large amount of chapters and drawings I have and will continue to put up on this site x.x

My big project at the moment is 'Raven Wolf'

Raven Wolf -
Due to human negligence the world as we know it has ended and been reborn. The animal spirits that guide man giving them the forms of animals so that they would be able to survive in this new wilderness. Though now carrying the form of beasts man has not forgotten the place they once had, as an existence greater then just what nature wanted of them, an existence above all.

Those that worked to gain their humanity are known as domestics, while those who wished to follow the rolls the spirits had given them were known as wilds. Both groups grew arrogant and hateful of one another, the wilds saw the domestics as selfish monsters, for they were returning to the ways that had once destroyed the world, while the domestics saw the wilds as primitive beings afraid of progress, they no better than wild animals.

The raven and the wolf spirits grew tired of the destruction and fighting, and sided with the wilds in their ideals, the domestics only capable of further destroying nature. In their anger they marked a tribe of wilds with a curse, they being removed from the sacred circle of life, unable to hunt or grow their own food, their souls never able to move on while their bodies are unable to return to the earth when they died. The curse upon them only broken once the domestics are gone once and for all. The cursed tribe now known to all by the name of the spirits whom cursed them. ‘Raven Wolf’
Links and Contact Details

lurodbonds
link
i love your comic an book im a huge fan  :3

7vem
link
heya kura ^^ looking at getting that comic done too, but hope ur all good ^//^ im slowly coming back hehe now I just need to catch up with all the art lol x//p

heya kura ^^ looking at getting that comic done too, but hope ur all good ^//^ im slowly coming back