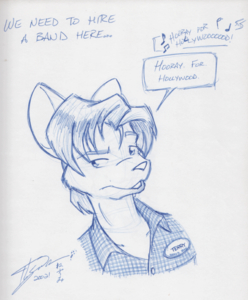 The Shark and Uncle Pennybags ...

The Shark and Uncle Pennybags ...

How Can Universal Studios Flor...

Join the CBG!
FavoritesSee All

Skylines Prelude (for Meister_...
by CassiMephitis

Stomping Grounds (For Meister_...
by CassiMephitis

Space Wings: The Fall of New K...
by CassiMephitis

Why did you favorite that one ...
by ShaneFrost

The Hollow Blade
by ShaneFrost
See More in Favorites
Profile
Okay, I'm actually a fur of multiple personalitiescharacters, but these are my most common:

Terry Rand Mitchell:
This is my old "default" character, back when I identified more as a rodent than a canine.  In all of Mr. Mitchell's incarnations, he's been a rat (not a mouse), and usually armed; he first came into being back when City of Heroes was still around (and I played him as part of a trio of rat siblings that were all made by the same scientific foundation, Forward Motion Laboratories) and a former criminal-turned-hero; his second incarnation was when playing another game of Warehouse 23 (a GURPS setting) as a tabletop RPG character who was more stylized after common protagonists from the Silent Hill series of games) — he started the adventure out with a steel pipe, a broken AM/FM radio, and a standard handgun.  Also, I played him to be a complete jerk.

Malcolm Lomper:
Malcom is my current incarnation, a lime green husky working as Chief of Security for [REDACTED].  Much like the second incarnation of Mr. Mitchell, Malcolm always appears in a three-piece suit (though, also like Mr. Mitchell, he never leaves the suit jacket buttoned up), but he also rocks a single-barreled, pump-action shotgun.  Also, unlike the second incarnation of Mr. Mitchell, so long as Malcolm stays in good standing with [REDACTED], he will never die (except perhaps of old age); every time he gets gunned down in the line of duty (or even off of it), he gets replaced by another clone.  While he's long since lost track of how many times he's been killed since starting his work with [REDACTED], he's actually somewhere on his 400-500th clone now.
Links and Contact Details

GoldeKlover
link
Thanks for the watch~! :3c

EmmetEarwax
link
Edited 7 years, 2 months ago by Owner
One of the later Doom Patrol had 65 alternate personalities, each with his/her own powers. Crazy Jane (named after a painting by Joseph Dadd, an institutionalized madman.)

You,however, are quite sane.
One of the later Doom Patrol had 65 alternate personalities, each with his/her own powers. Crazy Jan

EmmetEarwax
link
I'm commenting to YOU about Callmedoc's rumbling on technology. For some reason, he or she blocked me. I have no memory of speaking to him/her earlier. I am annoyed that people who did this, never lift the block.

Yeah, in the past 12 years since my father passed on, everybody -except me- now carries a pocket computer. Me, I am quite happy with a book. You know, 2 covers with pages of paper.
I'm commenting to YOU about Callmedoc's rumbling on technology. For some reason, he or she blocked m

terrymouse
link
Edited 11 years, 1 month ago by Owner
: Right now, on other sites, like FA.