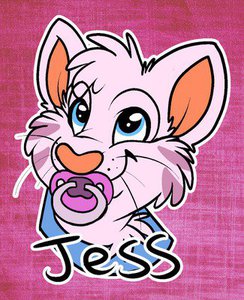 My awesome badge from Brisbee
by kittyjess
JournalsSee All
Might be a little slow for a bit
Hi everyone, Just dropping a line to say that it might take me a little longer to respond that normal as I'm currently knee deep in years old code that I need to short out. The new nekoKitsune is sti...
8 years, 7 months ago
show original thumbnails
GallerySee All

My awesome badge from Brisbee

My Tavi Mini Tag
FavoritesSee All

365S- 012- Cosplay :3
by Puppyroo
See More in Favorites
Profile
Hi everyone,
I suppose it's about time that I filled this little profile in and told you a bit about myself,
I'm Jess (or if you want to more pompous full version Jessica) and I'm a babyfur from the north east of England (a place that really has seen better days).

I'm a pansexual kitty with a rather large sexual appetite, who currently lives with a lesbian partner who's a bun bun (odd I know) in a partially open relationship (as in its ok for me to flirt with guys, even to the point of mating but I don't date any other girls and she is not interested in being involved with multi person relationships). I find other (furry) felines attractive, especially big cats in addition to other big predators like wolves and foxes.

I can be rather interesting given the right topic but I have a tendency to become withdrawn easy if my life doesn't run smoothly. I don't feel that my partner truly approves of my BFur side sadly and I long for someone to look after that side of me, a caretaker perhaps.

I have had a difficult life in an area that has been a constant downturn, I went to a rather ruff school where I had the living daylights beaten out of me and it constantly haunts me.

I'm a vegetarian kitty (always seems like a contradiction in terms) and have been for all the time I've lived with my partner, even when its affected my health badly, but I still have all my hunting faculties intact and do miss some aspects of eating flesh. My health is not that wonderful but it's thought that (outside my chest issues) its mostly psychosomatic and related to me moving back in to an area I can't stand.

I have rapid reflexes, a number of sexual skills and while I may not engage in most kinks, I am willing to try them for anyone.

I'm Wiccan, a computer tech/programmer/designer, a print based designer, photographer, PR officer and, formally, a comic creator (of a nsfw political band comic called neo: after the fall). I'm also the author of the webcomic platform nekoKitsune (that powers my partners websites, gilbertandgrim.com and commandercottontail.com). Over the last few years I've neglected somewhat my artistic pursuits, not recording that album I promised or putting up any of the 20 odd film cans that I have yet to process. I used to be the lead songwriter and singer for a north east band called RCS and MSH, that I'd classify as slightly aventgard goth.

I have a distinctive darker side but I'm mostly light and irresponsibly fun, especially when I'm in cub headspace. I'm not entirely accepting of my little side due to my upbringing but I do often require it to escape the rather stressful and unconventional life I lead and hope to stop the inbuilt spectre of my parents preventing me from enjoying myself.

While I sometimes can appear a bit of a loner, I really enjoy the company of like minded (BFur/DiaperFur, musical furs, artists, photographers, etc) people. I long for family and I adore my wonderful fur family that I have so far, I love them more than my legal one. I'm quite defensive and will defend my friends and family with my life.

One of my biggest fears is being alone, with the other being not being able to be myself.

My favourite bands include Siouxsie and the banshees, the glove, mindless self indulgence, Cab Voltaire, The Faint and Jack off Jill, but I have favourites in almost every genre. I used to work as a producer and mastering engineer for a indie label called hung teddy.

I have a huge thing for BFur items (especially plushies, diapees), cute cartoon and comic characters, tails, transformation and diaperfurs to name just a few.
Links and Contact Details

SkipperBunny
See all 88 Shouts on this Account
Leave a Shout...