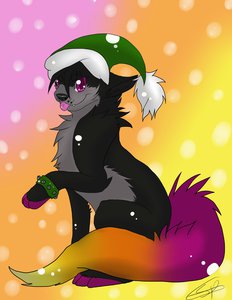 Sultry Season's Greetings
by SwiftFur
JournalsSee All
Wolf Children.
Best. Movie. E V E R .
8 years, 7 months ago
Calling all cute feral artists
I'm looking to commission decent feral artists to draw me and my friend together... If you know of/are any artists who could point me in the right direction, i would appreciate it ^^
8 years, 7 months ago
Is it just me, or...
I want to add a thanks to all the people who have watched and faved me since I moved over to Inkbunny! You guys are awesome and I hope to have more new stuff coming soon. While I'm excited to be a pa...
11 years, 7 months ago
show original thumbnails
GallerySee All

Ferro Fleetfoot
Pictures of my fire based emberfox feral.
1 submission

Cleo Sports Series
A series of pics of Cleo from the Catillac Cats playing various sports.
4 submissions
See More in Pools
FavoritesSee All

Don't Worry, Be Happy
by BobbyThornbody

Your As Bright As All These St...
by BipolarWolfy

Shut The Fuck Up!
by BipolarWolfy

Big Balloon Pounce - Rhari
by KennyKitsune
See More in Favorites
Profile
About me... I'm a rare cross-breed of fox, my primary color is black instead of your common, run-of-the-mill red fox, silver fox or white fox. I guess I'm an anti-arctic fox hehe Sometimes there has been some confusion that I'm actually not a fox, but a wolf. Truth be known, my mother was a vixen, and my father was a wolf, so that makes me... totally confuzzled LOL My markings range from completely black to dark shades of gray, most prevalent on my muzzle, chest, tummy and upper arms. My hair is an interesting shade of baby blue which kinda makes my deep blue eyes stand out.
I'm an artist and a writer. Though the 1990's my artwork appeared in a few furry art collection fanzines such as Scott and Stanley Alston's 'Bestiary', 'AnthropoMORPHINE', and 'The Bunny Pages'. I created characters whom still exist today in my online comic strip, 'Crazy Like a Fox'. CLAF can best be described as a 'furry slice-of-life' comic, often with nudity and mature themes. Past comic strips have poked fun at Janet Jackson and Saddam Hussein, to name a few infamous celebs. The comic is updated occasionally on my website and deviantART. Full character bios for most of the characters that appear in the strip can be found on my website.
I'm also writing a novel. It's called Crimson Fur, and is set in a violent near-future of our world. Crimson Fur tells the story of Sara, a young female raccoon anthro furry and her struggle against humanity in a hostile, discriminatory environment.
Links and Contact Details

MadWolf
See all 23 Shouts on this Account
Leave a Shout...