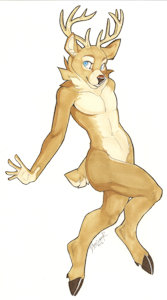 Feryl by Demicoeur
by Feryl
JournalsSee All
Drama Generators
Wow. One of the people on here I (was) watching has been whining for the last week about no one playing them any attention, but also has all commenting on their submissions and journals locked so no o...
2 months ago
Thank You, All <3
It's been a really rough time for at least 24 months. While a lot of the world was quarantined & made to stay home my job only increased & got more challenging. Some weeks I was getting 60+ hours & on...
10 months ago
Medical Update
Today I had the procedure to remove the polyps in my colon that had tested positive for cancer a few months back. The doctor said he didn't see anything else out of the ordinary while in there so as l...
10 months, 1 week ago
show original thumbnails
GallerySee All


Tails in some undies!
by AlystairCat

Bugs Bunny
by Dandi
See More in Favorites
Profile
Account of Feryl, whitetail buck & stag party starter from north Florida. (Also, previously Guardian the stallion, Feryl the citra & Draccoon the dragon-winged fox. Lives change, as do my representing fursonas.) I like to consider myself a writer as some of my stories have seemed to please people. Woot!

I am very happily married to my beloved Foxie Adriel & am not available for RP. Frankly, I find RP a sad & pathetic substitution for real sex & pity those who think it's great. But to each their own - just not for me. So while I will reject any attempts to RP with me, IRL fun is always an option. I may be married but I'm not chained to the bedpost.

My annual conventions are Furry Weekend Atlanta (FWA, the best con in the world in my opinion) & Megaplex in Orlando (when budget allows or there's not something more interesting that weekend). You can find me at both of these every year. Eventually we'll add one or two more cons to our annual roster, but we're good with these two for now.

Citras
Below are some notes and information about citras. To some this is the only canon source of information left on them so I'll leave it here if anyone wants to seek it. Personally, the species is pretty much dead since the creator of them (Zaush) has abandoned them. So yeah, here's citras...

What is a citra? This seems to be an issue of confusion to a lot of people lately. There have been a plethora of cross-breeds & bizarre sub-species popping up.

First, citras are the result of very advanced genetic manipulation in the distant future of Earth. Roughly 95% of the species are males with a genetic disposition to be homosexual. These are the variety commonly referred to as "citra." 3-4% of the species are bisexual males, capable & willing to breed for reproduction. These males are properly referred to as "citrus." 1-2% of the species are females, also called citrus. There is no such thing as a hermaphrodite citra, their genetics prevent such aberrations from occurring. The females form small clans with the breeding males in which they are the dominant member. A female is capable of producing a litter of 2-6 cubs per year during her breeding cycle of around 20 years, ensuring that at least enough citrus' & one or two females are born to each. While this does not serve to increase the population dramatically, it at least keeps the species in existence.

Citra lifespan is 25-30 years in their natural setting. Citras brought into civilization or cultured society can live up to 40-45 years under ideal health. Sexual maturity is reached at 3 years old & lasts for roughly 20 years.

A typical clan of citrus will be led by a breeding female, defended by the larger breeding males & filled with the younger males & a handful of citras that may be allowed to stay for the pleasure of the bisexual males.

Citras (Vulpes citra) come in 5 subspecies. Period. They are, in ascending order of social dominance to each other & size:

Lime Citra - Green. Avg 2.5 to 3 ft tall. Very submissive to almost any partner.
Lemon Citra - Yellow. Avg 2.5 to 3.5 ft tall. Somewhat submissive but can be dominant in the right situation.
Grapefruit Citra - Tan or Cream. Avg 3 to 4 ft tall. The perfect switch.
Pink Grapefruit Citra - Pink. Avg 3.5 to 4 ft tall. Generally dominant to other citras but likes it on the bottom once in a while.
Orange Citra - Orange. Avg 3.5 to 4.5 ft tall. They like it on top when grouped with other citras.

Note that these levels of dominance generally only apply to other citra subspecies. When paired or grouped with other partners it completely depends on the relationship between them. For example, an orange citra could be a completely submissive partner to a fox or a lime citra could be the dominant partner with a smaller mate.

Citrus (breeding males & females) are considerably larger, often as tall as 5' & retain the tan color all members of the species are born with. They are capable of consuming any of the citrus fruits of the other 5 species.

There are no other subspecies or cross breeds represented. Period. There are no strawberry citras, no marshmallow citras, no blueberry citras or such. Citras were created in a laboratory and are essentially genetically perfect to their cause. Their fur coloring & subspecies is the result of their extremely restricted diet set forth by their genetic code. Literally, a lime citra exists purely on the lime fruit. Its metabolism is perfectly geared to completely utilize the nutrient in a lime - and only a lime - that a lime citra needs to live. If it attempts to ingest any other fruit or food at all it will become violently ill & the reaction is potentially fatal.

All attempts to force feed a young citra with other foods to influence its color have met with very sad results. All attempts to genetically engineer variant citra subspecies have met with like failure. The technology & research that led to the creation of citras was lost when the laboratory of their genesis was destroyed.

It may be argued at this point that there have been sighting of "citrataurs." While these creatures have indeed been developed it should also noted that these are the result of extremely powerful biological alteration technology & are very temporary forms. The citra (or whatever creature was altered to be the "citrataur" will return to their normal form when the effect expires. Normally within an hour.

More will be added to this as I have time & review the extensive notes of the conversations between myself & the creator of citras, Zaush. All information set forth in this paper are the direct result of these conversations. As Zaush seems to have abandoned the citra species as a whole I am transcribing these notes from the past to keep this wonderful creature alive & in proper order.

KDragonL
See all 113 Shouts on this Account
Leave a Shout...

JordanTheChipmunk
link
You are sooo welcome! I think you are deserving of it! I know we don't talk much but you are a friend indeed. ❤️❤️😊

You are sooo welcome! I think you are deserving of it! I know we don't talk much but you are a frien