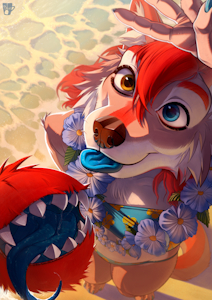 +2
Girls Just Wanna Have Fun - By BlueTeaa
by Darkflamewolf
JournalsSee All
Legend of Ahya: Target of Interest is out!!!
Book 1 of Taylor's series is out! You can purchase the book from any of these websites! I hope you enjoy it! I'm looking forward to showing you more of this world and its characters! Been 4 years in t...
2 months, 2 weeks ago
Legend of Ahya : Target of Interest Release Date
It is finally time! Time to announce the official release date for my first book in Taylor Renee's book series! It has been a long time in coming. My first art post of Taylor was uploaded on July 8, 2...
5 months, 2 weeks ago
Official Darkflamewolf Merchandise!
It is finally here! Official Darkflamewolf merchandise! After much researching, purchasing from and investigation into quality and reliability of services, I am choosing to go with RedBubble to manage...
1 year, 3 months ago
show original thumbnails
GallerySee All


Booping Into Your Business - B...

Figure of Prophecy - By Purrch...

Probing the Depths - By RikkiS...

Taylor Renee Wolford
A collection of commissions and pictures for my second self-made fursona that is the daughter to Murana. Inspired by Desoto Jellywerewolf with permission but designed and owned by me.
177 submissions

Taylor Renee Fan Art
A collection of commissions and pictures for Taylor Renee that I either did not commission myself or does not really follow the canon story of Taylor and should not be considered as fact.
66 submissions

+3
Ariana - "Ari" - The Arbiter's Daughter
A collection of commissions and pictures for my rival/antagonist to Taylor Renee in her upcoming books.
20 submissions
See More in Pools
Profile
Darkflamewolf is a prolific fan game designer who has created a variety of missions/campaigns/games for commercial video games such as Duke Nukem 3D, Descent, Zelda Classic, RPG Maker, Game Maker, and Big Kahuna Reef.

She started off as a young player wanting to create her own games since she first received Duke Nukem 3D from a friend in middle school. Once she found out it had a level editor, the spark of creativity was lit and it has not gone out yet. Since then, she acquired and learned to master the Descent Mission Builder that came with special editions of Descent; she went on to create several campaigns throughout the years for the game series. She also dabbled in RPG Maker territory, creating two games and currently working on a third which appears to be in Development Hell, even to the point of Vapor Ware. She has also created a sizeable collection of Zelda Classic quests, some of which are quite popular within that community. Interestingly, she dove into Big Kahuna Reef and created multiple level packs totaling over 250 challenging levels. Finally, she finished and released a fan made Mega Man game, Megaman: Revenge of the Fallen, on Nov 27, 2014. She has recently dabbled in writing her own stories and has completed a full novel-sized fanfic for The Legend of Zelda series entitled Zelda's Honor as well as working on another two fanfics for Final Fantasy VIII and Zootopia.

Her current round of projects involve a self-made RPG that has been in the works since 2006, and a new mission set for the Descent series. She is also spearheading a OC Remix album for the soundtrack of Skies of Arcadia with a total of 35 planned tracks across 3 CD s. As of February 7, 2017, this album has been granted official OC Remix album status!

She is also an avid fan of Zootopia and has a wide collection of art for her self-made OC fursona - Murana Delante Wolford to which she is currently writing a fanfic for.
Links and Contact Details