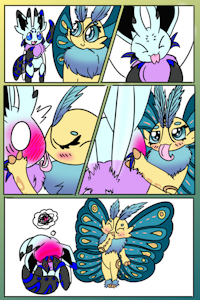 a smooch under the mistletoe

Sing Me A Song

NOT a Morning Bun..

laying down
See More in Gallery
PoolsSubmissions grouped togetherSee All

Comic- Unexpected
by Axial
See More in Favorites
Profile
DO NOT POST MY COMMISSIONS / ARTS TO OTHER SITES!

also for those who are wondering about me I guess I can do this...
relationship: single
sexual preference: straight
status: 60% crazy, 60% decent looking, 80% crazy, 90% silly, 120% affectionate and very funny depending how much coffee you injested XD


hey guys my name is eeveefan. i go by other names as well that i created for my characters.
so i also go by these titles:
Puffy and the Princess
puffyzepaline
Chico and friends
eeveefan (my original)

i will allow people to draw my chars but only if you message me first and tell me what you want to do with them, scenario, pose and whatnot. NO sexual stuff or nudity with my characters that I do not allow to be sexualized or naked with. clean art only for my clean characters.
in the future when i get better at art i might do trades/ commisions.

i have many many characters and i love each of them very much.
my current characters i have are: (OC = original character) (MC = Main Character)

please note my MC (Main Characters) are ones I do not allow others to enguage in sexual stuff with, they are clean art only. the ones not marked with MC I might allow depending on the situation.

my art is clean for my MC (Main Characters) I will NOT under any circumstances allow anyone to make anything sexual with them.  .
im a person who doesn't care about being famous, i want people to see my art for what it is and if they like it then that's fine, if they don't then they don't.

My chars ill allow for sexual encounters but only for the chars i choose:
Zeppy
Winter (possibly)
Midnight (possibly)

im hoping to someday make Puffy and the Princess into a comic book series and eventually more. many of my characters are destined for greatness and i hope to be there with them someday.

more to know about my rabbits:
my rabbits each have different species and alot of them i created myself. heres the list of what i have thus far.

Zepaline Planet Wildlife
Glider Senayes (sen-ay-es) "Glunta Sentayus"
(Glider Senayes or as the Zepaline's call them "Glunta Sentayus" are a type of gliding rabbit like creatures that had been discovered on the home world of the Zepalines, these creatures survived the mass excinction that happened on the Zepaline planet long ago and have not changed much at all from the time they were still alive and thriving, sadly their numbers decreased from the extinction that happened but are on the rise again. the Zepalines are currently making friends with their kind, these creatures are very smart and like to socialize, they don't wear clothes due to their membrane used for gliding so they are not shy at all and represent rabbits at first glance but are not related to rabbits, their ears are long and triangular and can be seen either like a lop and on the sides of their heads, behind their heads, or up in the air and can open up to form a glider or a way of scaring off predators by making themselves look bigger and having scary patterns on the inside. they are very lightweight and can glide for hours. their membrane stretches and is elastic like going from their paws to their ankles. their anthropomorphic and walk on two legs. their fur is super soft and smooth, and they love cuddling.) I am keeping this as a reference for later when their made.

(more to come when i get more ideas :D)
also if anyone wants me to post descriptions of each of these rabbit types let me know. if i get alot of people interested ill do so :D

Note: please do NOT post my pictures or edit any of my characters and post them on other sites. if this happens please contact me about this. the artists that make the arts and the ones I commissioned with are the only others that can post my art elsewhere.
Links and Contact Details

PFGFranklytheBreloom
See all 97 Shouts on this Account
Leave a Shout...