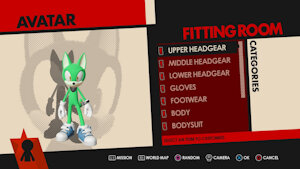 
WHAT ARE THOSE!?
by HiroshiSan

"Fine, stare all you want!"
by Jynkx

Jaytreon May 2021 Theme: Harmo...
by Jynkx
See More in Favorites
Profile
Hello everyone/everybody! My name is TheVirginianist (TaShawn Nanthony Matthews) and I am a Newcomer on Inkbunny.net. And just like DeviantART & Furaffinity, I plan on posting some of My Images (and or Gifs), and I hope you all like them. And I might try and do some 3D Images as well and post them up on here as well.

Basically once I learn how to use and work both Garry's Mod, Source Filmmaker, etc., I might post some of them as well. Just don't pressure me on certain stuff, cause I'll be honest with ya'll, I will NOT do it and/or because I'll end up taking some time on that work and image and because it's a little difficult to master.

Again don't pressure me with and on this. I also plan on look at and finding some images and gifs that I'll both favorite and comment on because of how I see the image and my thoughts on how it looks. :) And Also, I have Graduated from High School last May (on the 27th, in 2017) and is now free from School and is now slowly getting ready for the Real world now. ^^

I think that's about all I have to say. Time for me to find me some interesting and most exciting Images/Posts! :) :D XD ^^

Hobby: Watch T.V., Play Video Games, Go On the Internet on the Computer/Laptop, Listen To Music, Having Fun

Here are my Likes & Dislikes:

Hanging with my family, Making friends, School (Sometimes), learning and understanding things, being looked after, Listening to music, Video Games, Joy and Happiness, enjoying life, being mentioned in something (Basically if it's something I'm interested in), Ignoring Bullies/Bad People, getting something interesting, learning something new (if I can), seeing something new (in my interest), Having some fun

Sadness, some things I'm not interested in, hurt feelings, Being accused, being mad at, School (Sometimes), teasers and bullies, people mocking and/or mimicking me (if bad), People taking something that belongs to me, being weak, seeing others being hurt, being told to do something by their selfies (Depending on who it is), those who tries to get me in trouble, not understanding things, feeling left behind/forgotten (depending on what it is), Being told that I'm weird and being called as a weirdo (Depending on who it is), feeling rejected & not having fun (depending on what it is, or just for randomness)

SpongeBob SquarePants, The Adventures Of Jimmy Neutron, Drake & Josh, The Simpsons, Sonic X (Not as much), Naruto, The Boondocks, Avatar: The Last Airbender (A little), Star Wars (Movies Only), Kung Fu Panda: Legends Of Awesomeness (Possibly, but mostly just the Movies), Planet Sheen (Not as much), T.U.F.F. Puppy, Big Time Rush, My Little Pony: Friendship Is Magic, Durarara (?????!!), Avatar: The Legend Of Korra (A little), Empire (From FOX), Sonic Boom (Only the first episodes so far), RWBY, Steven Universe, Boruto: Naruto Next Generations, Senran Kagura, She-Ra & The Princesses of Powers (Getting Started, and Pending), My Hero Academia (WAY behind, but still getting into it), BNA (Brand New Animals) (Whenever I can and have time)

Sonicthebitch
link
Can you Link me in PMs from the e621 site please?