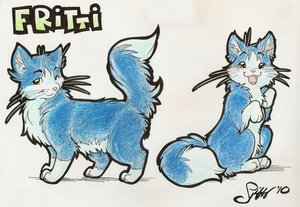 It's a me!
by Fritti
JournalsSee All
Well, it's happened
So, this is kind of an update on my previous journal, in which I told of how my father's mental health and abilities had started going pretty badly downhill and there was going to be a realistic possi...
1 month ago
So my dad's gone crazy
We knew it was bound to happen in the near future, but it came suddenly, and hard. I live with him in his house; yesterday he told me he had an appointment in town. I didn't go with him because I had ...
3 months, 1 week ago
Wow... FA suspension
So I had heard/read some horror stories from artists suddenly getting their FA account suspended or worse. I've been on there for a good 15 years now and never had any troubles. Until a minute ago. I...
1 year, 1 month ago
show original thumbnails
GallerySee All

Artwork - My adopted characters
This is quite obvious; the place where I will put artwork of characters that I have adopted. This will both be the original adoption pictures, pictures I commissioned of them, or ones I drew myself.
94 submissions

Artwork - My characters (commissioned)
This will be the place where I put all the artwork I have commissioned of the characters I created myself, which mostly are the Nezinoma Salis girls.
29 submissions

Minnaluna/Nezinoma Salis
Here is where I'm putting the stories of the world I created myself, with characters I created myself. This is an on-going series of loose stories.
24 submissions
See More in Pools
FavoritesSee All

gift for Mel
by MangoBird

I'll Keep You Warm
by SilentRavyn

The Playful Huntress
by SilentRavyn

A new friend
by purpletiger

Welcome to the love hotel~
by NekoStar
See More in Favorites
Profile
Well hello there! I thought I already had an account here, but it turns out I didn't so I made sure to make one!

Let's start out with some stuff about me; I'm a very fluffy, male, blue and white Maine Coon cat from the Netherlands. I'm also a writer, and I have been so for about three decades now. Admittedly, I have not been doing very much work lately, but there are plenty of my old fanfics that I wrote way way back in the day, and also a number of stories in a series that I started over on Furaffinity a couple of years back. As there are several characters in there that look very young and would be classified as cubs in our time, and there will be occasional sexual interaction with those characters involved, the account over here will definitely come in very handy to post those stories, and also the artwork I may draw of them, or more likely, will get commissioned of them.

A few things to add here, to make life a bit simpler for both myself and a lot of people out there visiting my little corner of IB here;

Yes, I know I'm adorable >~_^< And of course while it's always lovely to hear that, there's no need to constantly remind me of it, hee.
No, I do not RP. I used to do that a lot, it's a great way for me to flesh out my new characters, but nowadays I hardly ever have the time for it anymore. Plus, a lot of my characters are canon to the stories I write, the situations I put them in and the relationships they build up that way, so I can't and won't put them in different situations or worlds or environments that, canon-wise, they could or would not find themselves in. I also will not kill any of them off. Ever. (There are a few exceptions considering the RP-ing, but that is only for certain friends of mine, and it's very few and far between)
No, I do not use Telegram, Discord, or even any kind of messenger anymore. I used to use the Yahoo messenger, but I stopped using that since it updated to that new version which is pretty much impossible to handle for anyone who got used to the traditional YIM over the past decade. Telegram I can't even register at since I don't have a cell phone (that works), and Discord is too cluttered and illogical for me to make sense of and hardly runs on the old laptop I use - that exact same problem goes for Skype too, which I also do not use. Plus I hardly have the time to keep up with all of those kinds of things. You wanna talk to me, PMs are your best bet.
Yes, I have a LOT of characters. I have been writing for over 30 years now, so it's inevitable I built up a large collection of characters. Not to mention that I have been adopting lots of characters, and will continue to do so, thus the collection will continue to grow. Not counting all the small side-characters and inactive characters from tons and tons of stories I used to write in my early days, the list is reaching close to the 200 mark currently. However, while I do often put at least a little bit of myself in any of my characters as I develop them, they are just that; characters. Bodies and looks I adopted or created and gave a name and personality to so they can fit into the universe I created and the stories I write. None of them are alternate fursonas, they are simply products of my imagination, and while I may invest a lot into many of them, they are still merely story characters.

Something that is quite important, and which does usually come forwards clear enough from my stories and the artwork I commission but which I will reiterate for clarity; pretty much all of my female characters are lesbian. For one, I somehow just seem to write for them much better that way; for another, art-wise, it's a personal preference. You'll hardly see any of my characters in any kind of more intense pornographic depictions - more often than not they will show as pin-ups, tasteful artistic nudes, since I prefer that. Any pictures with more than one of my characters will always be female-only (except for the very rare cases where I appear in the pictures myself).
Now it's fine if any picture of any of my lady characters receives comments about how lovely and sexy they are and how much the commenter would like to get involved with them, but I would advise anyone to not get their hopes up. Most of my characters are canon to my universe, a number of them are involved with someone therein already, and none of them are interested in males.
Links and Contact Details

Geekycoon
See all 51 Shouts on this Account
Leave a Shout...