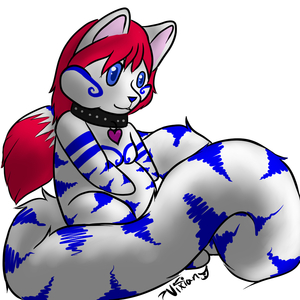 Plushie Liven
by VladiraBloodmoon
JournalsSee All
Totally Freaked out
It's my own damn fault I'm sure but I'm one freaked out chick right now. I had to make a slight emergency appointment to go see my femie Dr. for the morning cause I might have some thing. If that wasn...
10 years, 2 months ago
I'm Uploading
Okay so none of my watchers ever said if they did or didn't want to see my characters in their normal forms so I'm uploading pics of them now.
10 years, 6 months ago
Wondering
I have recently been thinking of adding a few pics of my female characters to this site. Most all of my characters are female Vlad my main sona is a shape and gender shifter, but my other three are ju...
10 years, 6 months ago
show original thumbnails
GallerySee All

Shadow_Nightpaw
This will have any pics that my mate Shad is in.
6 submissions

Other Characters
Any art that has a friends character in it.
5 submissions
See More in Pools
FavoritesSee All

In de woods
by Snofu

The Gym Bitch, 1 of 2
by Immelmann

Our Naga Overlords
by Immelmann

Club can't even handle me righ...
by Snofu

Is it admiration for maou Maou...
by Maou

Border Collie Immy
by Immelmann
See More in Favorites
Profile
Sorry I haven't been doing this on every one's pages but THANK YOU ALL FOR THE FAVES AND WATCHES!!!! it really does mean a lot to me when you like my characters and the art I get of them.

Okay so now that I'm on here more I will upload pics of all my characters a little at a time.

I'm going to give the Bios of my characters here though.
My main fursona is:
Name: Vladira Bloodmoon/Nightpaw
Species: demonic, vamwere, shape shifter
Gender: gender shifter [mostly in female form]
Age: Looks 21 but is too old to say
Orientation: Bi
Roll: Switch [full switch with males, mostly dom with females]
Basic info: Vlad is mated to my RL BF so she is off all limits. She does wear two collars now. She is mostly found in tiger form with a more snowmew tail for the pleasure of her mate. If she is in a pic with white fur she is refured to as Mrs. Nightpaw, black fur is normal Bloodmoon.

My secondary fursona is:
Name: Fluffy_Tail
Species: Squirrel
Gender: Female
Age: 22
Orientation: Bi [male pref]
Roll: Switch [full switch with males, mostly dom with females]
Basic info: Fluffy is a normal squirrel but thanks to Vlad she can make her tail even longer and fluffier then it normally is. She is always nude but she uses her long hair and tail to keep her chest, crotch, and ass covered from peoples prying eyes. She can make her tail into a giant cocoon and make it harder them most metals if she feels threatened. She has two tattoos, the one on her left hip is a heart that shows she has big loving heart, the one on her right hip I haven't fully figured out yet but it is meant to be a symbol of her love of sex.

Name: Adira
Species: Fox
Gender: Female
Age:19-20
Orientation: Straight
Roll: submissive
Basic info: I haven't worked too much out for her just yet. She will have a longer fluffier tail though and her hair might change.

synthariadesire
Gender: Male/ Male Herm
Age: 17-18 [on FA that is his age on here his age ranges from 6-18]
Orientation: Bi
Roll: Switch [mostly sub with males, full switch with females]
Basic info: He is very new so still working on it.
Links and Contact Details