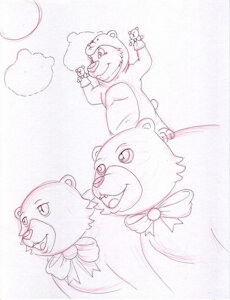 Kuma Kuma Kuma Teddy
by Teddy
JournalsSee All
I'm not stoned enough
Help! I'm in need of weed. If everyone sends me 5 dollars, I can buy an ounce. *Just Kidding!* :D
3 years, 3 months ago
Teddy makes a guest appearance!
Teddy tests out his vocal muscles, rather than his other one for a change. :D Go check out The Karaoke Cubs  ~ https://inkbunny.net/s/1243419 ~  by  nelson88 ( https://inkbunny.net/nelson88 )
5 years, 12 months ago
Patreon Annoyance
People that rarely post are are posting images of themselves begging for people to give them money by Paetron now?  Seriously? Patreon is a tip jar people! Not supposed to be a subscription or beggin...
8 years, 4 months ago
show original thumbnails
GallerySee All

Please collar me as yours!

Marc Leonhardt Sketches
Be sure to check out Marc Leonhardt's $5 sketch streams!
50 submissions
FavoritesSee All

Extortion! (with Shade Koopa)
by FriskyWoods

At your service
by AniCrossBear

Love is so beautiful with Crea...
by SebGroupArts2009

Quick Sketch: Grumpy Bear
by LuxBrush
See More in Favorites
Profile
I really need to update my origin story.. however, I started off as a little blue bear cub with white tummy fur. I lived in a big hollowed out tree with my parents, it was wonderful. However something happened that needed their immediate attention. I was much too young to understand what was going on, however my mother put her enchanted necklace around my neck before her and my father left.

That was the last I saw of them.

The amulet kept me safe and provided safety and comfort. It also had some other magics I didn't know at the time. After a couple years, I began to realize I wasn't aging. I was still stuck as a toddler bear cub, and though my body remained unchanged, my mind slowly began to understand the powers of the amulet. It was as if it had a sole of it's own, part of my mother's perhaps. I sensed a presence, but couldn't describe it except for being caring and nurturing.

It wasn't until may years later that I discovered it had transformative magics as well. I could appear as anyone, be anyone, even be invisible. There two conditions however, my size remained the same. Also, the effects were permanent until I wanted to change again. One winter I thought it would be fun to be a polar bear, bounding in the snow, chasing rabbits, it was alot of fun, for a while. I even had a cute blue and white scarf to match my markings.

Even though I had the company of the presence in the amulet, I became lonely. I missed the hugs and cuddling from mom and dad. If left me miserable.. until one day I had an idea. If I could transform into anything, I wanted to be something that would be loved forever and ever.

I held the amulet in my paws, focused in my mind a cute chubby polar bear plushie clad in a fluffy diaper. The next thing I knew, it was so... scarf and all. The other thing I realized was that the amulet had disappeared. It seems some of the magics inbued itself into this soft plush body of mine. With the amulet missing, I'm afraid I may be stuck this way.. but really, I don't mind. It's very comforting feeling soft and fuzzy all over. It's like a perpetual hug.

While this plushie body of mine can talk, my fingerless paws can have difficulty with the human keyboards. While technically not having the plumbing to necessarily require diapers anymore, it has stayed a constant reminder of my age, frozen in time. Perhaps the amulet will return to me, perhaps not.

One day hopefully I'll find someone to hold and cuddle this soft fuzzy body of mine.