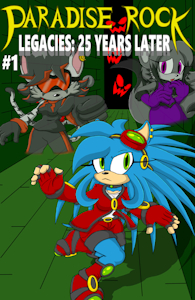 +25
Paradise Rock #1
by ParadiseRock
JournalsSee All
YCH featuring Clarity
:iconLittle-Gray-Bunny: is hosting various YCH bids for various characters. One of the characters choose is my own Clarity. So, if you want your oc to give Clarity a X-mas flavored fugging, please c...
1 year, 1 month ago
show original thumbnails
GallerySee All

Purity on her card
by angel85
Profile
In a far off alternate dimension of Mobius exists the [Paradise Zone], named after it's main world counterpart, "Planet Paradise". The Chaos Emeralds, alongside the Master Emerald were brought together and completely destroyed, their contained Chaos Energy released into the planet as unstable, untamed Chaos Radiation in a massive explosion. The world should of been shattered from the resulting explosion, however the Chaos Radiation simply covered the planet and became absorbed into it, becoming a regular part of the atmosphere. Since that moment, the planet itself became one massive' chaos emerald', constantly radiating it's energy throughout it surface.

However, the atmosphere resulted in many getting sick, unable to coop with now high levels of radiation regular throughout the planet. 33% of the population died to radiation related illnesses, most of them being humans. Those that survived didn't see any different difference in their lives, thinking themselves immune to the Chaos Radiation since it didn't effect their health.

A new generation was born some years later, and is the first generation to be effected by the unstable Chaos Radiation that was now a normal part of the planet. Children began being born with abnormal powers, powers that varied from child to child.  From the ability to control the elements, to mental abilities and ability to effect their own bodies. Researched revealed the cause of the wellspring of special children.

A gene, affected and changed by exposure to Chaos Radiation, because of this these abilities were named "Chaos Genes". These "Chaos Genes" require the Chaos Radiation in the atmosphere to function. Should a Chaos Gene user run out of Chaos energy, their body would drastically fatigue, sometimes to the point of fainting. People with Chaos Genes also can't go into a Super Transformation, since all Chaos Energy absorbed goes to empower their individual Chaos Gene.

It is now roughly 25 years since the Chaos Explosion Event, and with a plethora of young adults now with very powerful abilities, the future could go either way. It's all in the hands of these Chaos Gene users.
Links and Contact Details

Windmutt
See all 13 Shouts on this Account
Leave a Shout...