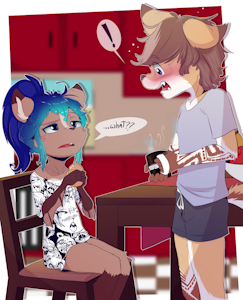 *commission* Where'd You Get T...
by sicMoP

Love is dangerous
by ColdBloodedTwilight

Drinks Are On Me
by sashtrash

I'm up here, silly~
by creatiffy

[Reward] My Hero
by vavacung


Fursona: Kage (translates to shadow in japanese, and pronounced ka-gay)

Age: Unknown (roughly a couple thousand years old, though because of his shape shifting abilities he can appear as any age between cub and ancient)

Gender: Any (thanks to his shapeshifting abilities Kage can appear as any sex he chooses, male, female, herm, neuter, whatever.)

Personality: Kage's personality varies as wildly as his appearance, but he's usually a calm almost cold calculating creature with a warm spot for his mates (both sexual and platonic) and a murderous streak for anyone else who dares to harrass them or interfere in the life he leads.

Appearance: Usually appears as a male Wolf around five and a half feet tall, one hundred eighty pounds, with deep penetrating blue eyes and stark black furr, but thanks to his shape shifting abilities and my imagination he can appear as anything I choose on a whim.

History: More to come... maybe...
Links and Contact Details
No contact details added.
Watching535 usersSee All
Watched By204 usersSee All