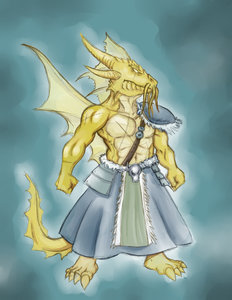 What Girls do Best
by CursedFerret

The Wavelength of Violet Light
by Ketsa


"Looks just fine to me."
by talon2point0

"You'll get used to it."
by liontaro
See More in Favorites
Profile
I tend to call people Wanker when they make me angry....
Past that, I am a really mellow person (due to a daily glass Jameson. I love good whiskey).

Three words that best describe me are:
Nerd (seriously. Talk about some nerdy topic with me and you'll be hard pressed to make me shut up)
Cynic (both in the classical and contemporary definitions)
Optimist (No, I do not consider cynicism and optimism to be contradictory. One is a set of values, the other is a mental outlook. I may find most of what humanity chooses to give meaning to rather....pointless, but I tend to always see a silver lining)


I wish I had an ounce of artistic skill, but I have to settle for just collecting an inhuman amount of pictures....

So, a little bit about my character:

Name: Seijuro Satoshio
Race: Gold Dragon (3.5 edition D&D)
Age: Old. Very old. Not even dragons are sure how long they live in terms of human years. In draconic years, dragons tend to live to be about thousand, but that in terms of human years is immeasureable. Best Seijuro can figure, he is at least five hundred in dragon years, quite possibly making him five hundred thousand human years old. In his dragon form, his age is indistinguishable, but while in hybrid form he looks about mid-age.
Personality: Seijuro enjoys talking with people (exchanging stories and tales mostly), loves reading, and enjoys practicing his martial arts. He is also a lecherous, panty-pinching, alcoholic pervert. One of his favorite past-times is literally showing off his form and showing up younger men, being that he is mid-aged at this point.
Bio: Though Seijuro likes to exchange ideals and stories with people, he is largely secretive of his own past because it is not his nature did to disclose such things about himself. Dragons are naturally secretive and observers, and Seijuro is no exception to the rule. (This is the way for me to cow-tow out of having to write an entire bio. I've used this character for at least 12 years, originating in a D&D game, and I can't remember half the things that have happened to him)

I know most people say 'Taken, don't ask for RP.' I am not taken. And I still love to RP with the character. He is the only time I really get to cut lose and just relax (even if he IS a little too Mary Sue for my own tastes)
Please send me a quick note saying 'I am looking to RP' I am horrible about getting on any IM's (blame Trillian for that one) so it pays to know when I have people waiting.

And for anyone wondering, IRL, I'm 25 and a huge nerd.
My addictions include tabletop RPGs (D&D, Dark Heresy, Palladium Heroes, d20 Modern mostly. Used to play Shadowrun and World of Darkness, but Whitewolf started going downhill to me), Tabletop Wargaming, Star Wars, videogames, and comics. I will always argue Marvel over DC and contend that Lex Luthor is a great man, not a villian.
Oh. I am a Warhammer 40k addict.
Emperor's throne, am I an addict.....
Grey Knights (PURE GK's, no inquisitors) are WERE my army of choice. I hate the new codex and I hate Matt Ward. I reserve the phrase "Penultimate Cocksucker" for him.
I miss my Daemonhunters codex. Sure I lost almost every game, but at least my army was mostly balanced.
I play Orks now. WAAAGH!

I am proud to say that I own my own business.  Me and a good friend do recording right out a living room, for cheap.
We just started it, but hopefully it takes off.
Links and Contact Details

TibbyLTP
See all 19 Shouts on this Account
Leave a Shout...