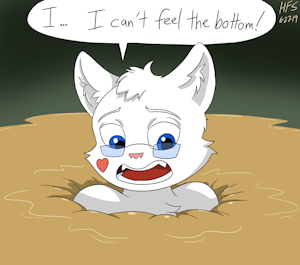 [Kofi reward] Victoria the she...
by Bunnybits

Kiss under the mistletoe
by Sekyno

Xander the yordle
by Sekyno

Devil Academy Teemo
by Sekyno
See More in Favorites
Profile
I am a Yordle. A king. A writer. Should you be interested, you may add me, if you want, I live on Discord nearly every day. I also RP, and am married to my beloved Teemo!

To whoever is interested in the lore I made for myself, my castle, and my city:

The city of Leth, being built at the base of the Sablestone Mountains, has made it quite the popular trading place for precious minerals extracted from the mountains, frequently trading materials to Bandle City. The city itself being built with those same materials - marble, stone, brick... But the most important being faith.

No statues, no churches. All of its' citizens pray for one thing; the safety of Bandle City. As it is the first line of defense for Bandle, they stand ready to stop any attacks on contact, using the mountains to their advantage, with several guard posts lined up on the highest peaks of said mountains. A lush, vibrant forest that threatens to tower the mountains protects this city from behind, as well, as the forest has become so thick that travel through has been deemed unsafe to the public, and only the roads connecting the city to others gain travel.

Leth is a proper city-state, being fairly large in size compared to most of the cities near Bandle, trading posts set up all around the entrance of hard-working, but gentle, Yordles wanting to sell you precious gems fashioned into jewelry or sold to you by the stone. Smells of exotic foods found only in the very small amount of forest the city will allow its' citizens to harvest can be noticed from half a mile from the city. Sadly, since it is set up at the base of a mountain, food is not a natural recourse the city can get easily, so it has Bandle send it supplies to keep its defenses up.

Deeper inside the city are more developed shops, clothing stores, food, appliances... Everything needing to make a city happy, and at the deepest part of the city, at the edge of the mountain, are all of the public houses. The higher up on the mountain, the bigger the house, the more expensive living it is. Several manors and mansions line the exterior of the mountains, with steps leading from the city all the way to a castle up at the top of the mountains.

The Holy Castle of Lethoric, stationed at the top of the mountains, harbors all of the first line of defense. Should this castle fall, Bandle City would be in danger of land-based attacks. Because of this, nearly all of Leth's guards and security is housed up in the castle, a castle big enough to house an entire army. On the opposite side of the mountains, hundreds of outposts, scout towers, and sniper locations. A castle made of nearly pure marble and gold, different colors of gems lining all the walls and banners, and at the very back, a giant throne much too big for the King currently using it, a throne room held up on marble columns and sitting at the very back - a throne much too big for the King sitting on it. Behind this throne is a specific staircase leading directly up to the highest floor in the castle, the Royal Treasury, a room filled with all of the gems mined from the mountains that the King took a liking to, filled almost to the ceiling.

The floor above the throne room is where all of the living quarters are. Hundreds upon hundreds of rooms for guests, servants and soldiers alike, all kept perfectly clean for the next guest to sleep in them, with a kitchen and dining hall being so large it nearly warranted its own floor in the castle. Foods of the highest quality can be served at a very small price, of both exotic and native, large and small. Seafood from Bilgewater being the most bought item in his city, oddly enough. Soldiers and servants eat for free, but are under such strict abuse rules that famine has never been an issue.

Then, the castle's armory. An entire floor filled with all the supplies needed to protect Bandle City... Demacian swords, Piltover rifles, and Bandle's very own Scout traps, all custom made for the small Yordle race to use, with plenty of backup to spare. While they do have rifleman, many of the soldiers prefer archery as an alternative, for stealth reasons. Armor, both glowing with magic and darkened with power line the walls, used only by the castle's most elite soldiers at the most desperate of times, enchanted by mages who dabbled in both the light and the dark arts of long passed times.

Right at the center of it all is a stone. A stone made of pure light, that burns to touch and blinds the eye, sits atop a pedestal, and it was originally found deep below the mountains. Hundreds of scholars tried deciphering what this stone could be, but only one cracked its secrets. The King decided not to use this as a way to conquer the land, but instead protect the people he loves... And so he became a conduit for Holy magic. With this stone, any solder or citizen under his rule need only internally pray for the safety of the city, and the safety of Bandle, and they will be cloaked in a holy light, their weapons bathed in it, and as a last line of defense, pool all their prayer into their King, so that he may make one final stand to protect Bandle City.

The King himself is a gentle and kind one, strict on his rules and orders, demanding when needed. He wears long-fitting clothing when in public, but on his throne... A long, oversized dark blue robe that's tied up in several scarves of different colors, battle-worn gloves that show decades of battle, boots that allow for quick movement when needed, and fitted over his robe is an extremely light plate of armor, not a scratch on it. His cape is also dark blue, and overly huge for a Yordle, and up on top is his gold crown fitted with nothing but rubies.
Links and Contact Details

Sammilicious
link
Oh I deleted the picture cause I'm new to IB and have no idea how to batch pictures! -hugs back- :o

Oh I deleted the picture cause I'm new to IB and have no idea how to batch pictures! -hugs back- :o