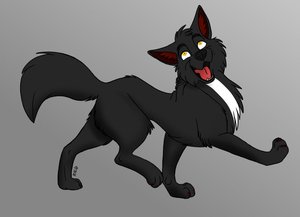 I'm so HAPPY
by KaleShadowWalker
JournalsSee All
Story List
Now that I've finally finished a story, here's a list of what I'm currently working on. This is for sure not the order that I'm gonna finish them, haha. Brief descriptions, don't wanna give anything a...
9 years, 5 months ago
Question - Please Vote
I want to give y'all the ability to download my stories (well, you can already, but..) and was just wondering what format you prefer? Text (.txt) Rich text (.rtf) PDF Word (.doc or .docx) Open format...
9 years, 7 months ago
Facebook - I haz one
Yush..I have a facebook...so if you by chance have one and wanna add me: https://www.facebook.com/KaleSwFaolan That is all XD oh..still looking for someone to poke me and make sure I write *Nods*
11 years, 8 months ago
show original thumbnails
GallerySee All

Body Description: The werewolf know as Kale stands at a good 6 feet and 8 inches tall, sporting a muscled 275 pounds packed on his frame. His thick but soft black fur hid away the definition, but once one ran their paw or hand through his fur, they would feel how powerfully built he was. But his fur wasn't totally black, a thin streak of white fur carried all the way down his body from his chin down and across his sheath and down the underside of his tail. The fur on his head was grown out and tied back in a pony tail, the end falling right below his shoulders. His eye glow golden-yellow with any light they catch, his pointed ears twitching above his head to catch the sounds all around him, each having a hoop earring on the very tip. His nose sniffs the air, picking up all the scents around him. He flexes his four fingered hand paw, red claws ready to please or attack. Sure, four fingers meant that it was harder for him to use a computer but he knew how to work around that. He stands on large digitigrade footpaws, each having only four large ties with red claws. He had soft pawpads both on his footpawas and hand paws, though they may feel a little rough from use when ran across sensitive flesh. His muscled and long arms and legs looked as if he was just as comfortable running on all fours as he was on two feet. He also sported a large sheath and a pair of large balls, and if you were lucky, he might let you see what was hidden inside. Around back his rear was nice and rounded but firm, ready for anyone that wanted a tight hole and a firm rear to mate/yiff/breed with. His long, thick tail hung over, hiding his puckered entrance when he wore no clothes.

Clothing Style: When ever Kale wore clothing it always matched his fur. He wore nothing but black, his shirts always tight on his chest and arms. He wears his pants loose though, held up by a spiked belt and they usually had chains or something on them, typical goth pants to say. He also wore spiked cuffs around his wrists and a spiked collar around his neck.

Personality: Despite looking like a big, bad wolf, this were was actually quite sweet and loving. He loved making new friends and enjoyed a good conversation wrapped in the arms of those he called his friends. He would always try to do what he can to help a friend, and sometimes even a total stranger if they looked like they needed saving or helped.

Sexual Personality: When it came to stuff in the bedroom, this werewolf may look ready to rape the closest thing that moved, but he was actually submissive. He preferred to be on the receiving end, loving the feel of a thick cock pounding away at his back door. He did on rare occasion top, but even then he still liked to be told what to do. He had various kinks and if you asked, he just might share them with you, but was usually up for trying most except for anything extreme including scat and watersports.
==============================
Always up for chatting with someone new. Feel free to PM me or note me!
Links and Contact Details