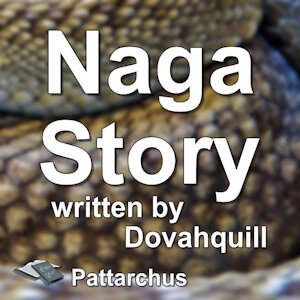 
Over the next two days, Deliah and her family participated in the festivities and gift giving. As the merriment began to wind down on the third day, Granny Gisela visited the young doe once again to bid them farewell.
“You should visit more often,” the crazy cat lady admonished, “your family gives me something more exciting and sensible to look forward to. Most town ladies still believe your family has some kind of enchantment with those fancy dyes you use.”
“We might,” Deliah answered warmly, “father said he struck a new deal with one of the local guilds for those same dyes. We will at least visit next year again.” As she bid her older friend goodbye, her thoughts turned back toward the enigmatic stranger she’d met earlier. Her curiosity had vexed her greatly, and she regretted her childish fear around the serpentine male. “Have you seen the um… the deathsman since the first day of the festival?”
Granny Gisela shook her head, “He usually only comes out the first day to buy the barest necessities. As I told you,” she wagged her finger this time with her other hand resting on a gnarled walking stick, “he’d about as interesting as drying paint.”
“I don’t know,” Deliah protested, “he struck me as aloof.”
“Oh,” Gisela placed one hand to her sagging forehead, “has the brooding stranger captured the heart of the young maiden?”
“No!” Deliah denied even as her fur reddened in embarrassment, “I just enjoy meeting new people, and this is the first time I’ve seen him.” She crossed her arms and frowned.
“Calm down, girl,” Gisela chided, “let an old lady have her jests. It’s one of the few reprieves from old age. Furthermore,” she again began to wag her finger, “if you’re so curious, why don’t you bake him something and knock on his door?”
“What?  Why would I need to bake him something?” Deliah continued to work on packing up the bolts of undyed linen as she asked with a confused expression.
“Well, it would be rather obtuse to show up with no other reason than to interrogate him,” the dry tone Gisela answered earned a scowl from the young doe, but the elder merely smiled and continued, “if you do, I’ll go with you.”
“Really?” Deliah asked, her curiosity rising. With her older friend, Deliah felt the lingering anxiety settle, “Okay, if you come, I’ll bake and visit.”
“Good,” Gisela answered with a huff, taking a seat on a packed crate, “it’ll be the most excitement I’ve gotten in years. I still remember…” Deliah tuned out her friend as she busied herself. If she were to bake something and pack, she needed speed.


At the autumn festivals of the village Deliah meets their Deathsman for the first time. His very different appearance immediately catches her eye. But a rumor is going around about this Naga. Deliah needs to know the truth and ventures out with a fairly exceptional companion in a quest to find answers for this quest.


Do you enjoy writing stories and are you looking for a place where you can hone your skills, attend workshops and lectures or just meet other like-minded writers?

Consider to visit the
Writers' Crossing Discord Channel
at https://discord.gg/TDH7tqZagb

Curious readers and those looking to get started with writing are also warmly invited to stop by and pay a visit!