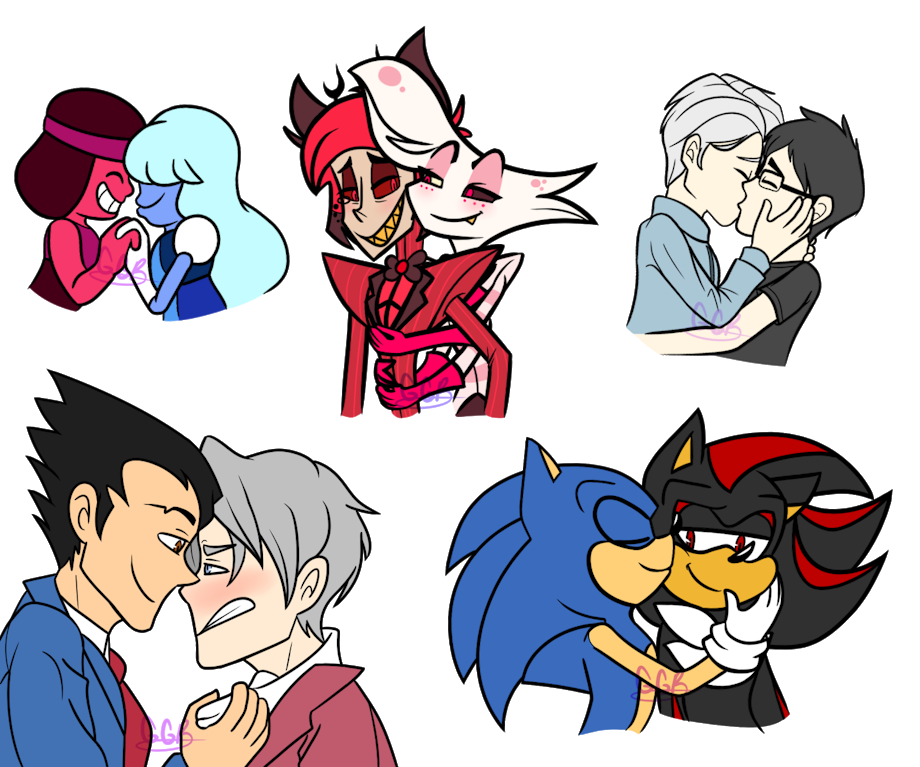 Sonadow (SonicXShadow)
The most obvious choice if you follow me, so I won't go into all the details. I do think they are pretty cute together, and they have a lot of potential to become closer. With that said I only ship it in the fandom, meaning not in the canon. I think it would be pretty weird and out of nowhere if it were to randomly become canon; at most I only see them becoming good friends (like how Sonic and Knuckles did over time).

Garnet (RubyXSapphire)
One of the few legit examples of LGBTQ+ representation in mainstream US media, and I absolutely adore them! I love how they are so affectionate to each other, and they really care for the other's well being. In my opinion, they are one of the more realistic examples of romantic relationships in kids' media, because they do have issues sometimes, but they do solve them civilly in due time.

Radiodust (AngelXAlastor)
I started getting into this ship when I started watching AshleyNicholes' animation streams on YouTube, and she would talk about her feelings about it. I'm pretty sure that this will never become canon with their current character dynamic, but I think it would be cute. For those that are wondering, I do know that Alastor is confirmed to be asexual; and that's the reason I prefer the fluff/romantic side of the ship.

Victuuri (VicturXYuri)
From one of the few animes, I've taken the time to watch consecutively because of their chemistry and character development. Just like Ruby and Sapphire, their relationship is handled very realistically, as their romantic feelings towards each other builds up over time. Victor is normally the one to take action by making a move, but even then those moments don't happen that often; which makes them even more special. I'm glad they were confirmed by the end of the season with them performing a couple's routine at the very end; speaking of which I NEED A 2ND SEASON!!!

Wrightworth (Pheonix WrightXMiles Edgeworth)
Only recently I've gotten into this ship, but I love it! In the past few weeks, I've watched GameGrump's and Alfred's (the guy who played Eggman in the SA2 and Sonic 06 fandubs) playthroughs of the first Phoenix Wright game, and I do feel that there are strong gay undertones between Phoenix and Edgeworth. If you have no idea what I'm talking about, take the time and either play the game yourself or watch their playthroughs.