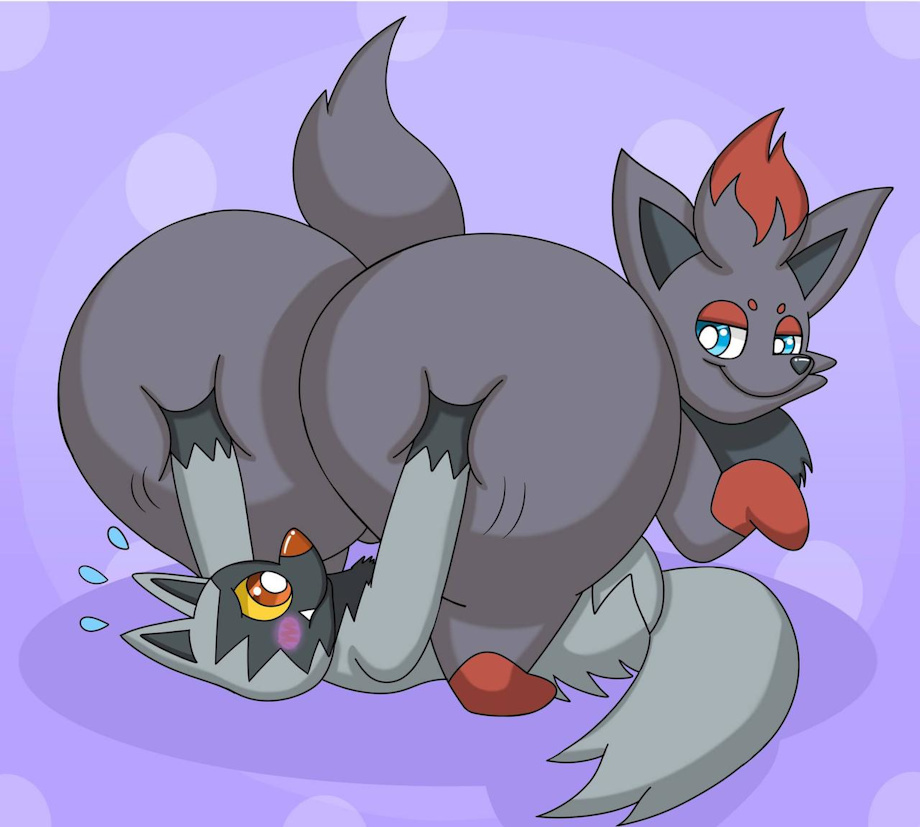 Story: (Contains farting)
A Zorua was wandering around the woods feeling more smug than usual. His fat cheeks clapped together with every step he took and he made sure to take extra big ones. He was proud of having such a beautiful feature to him.

He marched down until just ahead, he saw a lonely little Poochyena standing in the middle of a small clearing. A great big smug smirk spread across his face as he came up with a devious ploy to play on the boy. A smoke cloud formed around the Zorua and masked him in dark smoke. The smoke cleared to reveal the Zorua transformed into a female Poochyena. Though whenever he transformed, he always made sure to keep his butt big and oversized. He wouldn’t bear to hide his greatest trait!

He strutted on over to the Poochyena who was looking around worried. The Poochyena turned to see a female Poochyena walking toward him. His eyes lit up, she was quite pretty and he couldn’t help but noticing her very large rump. “Oh, h-h-hi there!” he spoke. The fellow Poochyena was smirking  fiercly. “Why hello there~” the female replied in a sedustic tone. Poochyena blushed nervously, he wasn’t very used to talking with girls and now a pretty girl was sitting and talking with him. He was a nervous wreck! “S-so umm.. I think i-i got lost.. D-do you know where I-I am?.” he stumbled. The female chuckled. “Why yes, I know exactly where you are at.” she said charmingly. She turned herself about and butt bumped his head and pushed him to the ground. The female chuckled.

“H-Hey what was that for?” the Poochyena complained, rubbing his head. The female stepped over him with her huge butt facing him. “W-Wait what are you doing?!” he questioned her. The female chuckled wickedly as a puff of smoke surrounded the female. The smoke cleared to reveal a… male Zorua!?!

The Zorua snickered and pressed his butt down a bit to trap the Poochyena. “You’re under my big butt little guy!” he joked. The Poochyena put his paws up to push the big cheeks away from him, but his paws only sunk into the pillowy flesh! The pup began to worry, he couldn’t stop this butt!

A growl came from the Zorua’s stomach. “How about you get a load of this!” the Zorua shouted. The Poochyena opened his mouth to protest right as Zorua let out a trumpeting: BRUURFFT! Right in his face! His fur blew back from the force of the winds and the potent stench of old berries filled and burned his mouth and nose.

“Ha ha ha ha!” the Zorua laughed, seeing the pup cough from the scent of his gas. It was always a pleasure to torment people with that large butt of his. The Zorua lowered his butt more, heading right for the Poochyena’s face. “H-Hey… you aren’t gonna sit on me a-are you?” the Pooch asked.

“What do you think pup?” Zorua asked rhetorically. He sat the rest of his weight down and plopped his massive booty on top of the Poochyena’s face. “Heeheehee!” the Zorua snickered as he watched the Poochyena disappear beneath his rump. He wiggled it around on top of the pup and settled down. “We’re gonna be here awhile mutt, might as well get comfy!” the Zorua taunted, while letting out a big BRRRPPT!

The Zorua shifted more of his weight onto the Poochyena's face. He wouldn't be getting up off that face anytime soon. Maybe he'll get off the next day, but for now that poochy face was so comfortable for his is fat wobbly butt that he just couldn't help but remain perched on top of the pup. He made sure that Poochyena stayed awake by blowing some nice hot gas right in his face for him to inhale. Can't exactly sleep if you've got burning Lungs!

Poochyena still entrapped by pure booty took each fart in with a whine and a wince. One would think that when the Zorua finally fell asleep he'd stop farting, but it seemed to only make him fart more frequently! Long hot ones too. Every few seconds a fart pelted him right in the face. Some PPRRRTS! Some BBRAAPPS! and a couple ungodly sloppy sounding bubbly ones that weren't dissimilar to the sound of a sputtering engine. This was the Poochyena's entire night all the way up to late morning. When the Zorua finally did get up the following morning, the pup was far too exhausted to move. The only thing he could do was pant for fresh air as the Zorua stood over him laughing.

It was a remarkable sight for the Zorua to see his poor "stool" in such a distressful state. Though as fun as the poochy was, the Zorua must depart. After all there were plenty of others in need of having the pleasure of being introduced to that grand posterior of his.

The Poochyena watched as the Zorua swaggered away, giving the Pooch a grand display of his clapping cheeks. Oh how that ass would haunt him. The pups fur would no doubt stink for months after such a bombardment, regardless of how much washing he did. He could smell the stench emanating off of him just lying there. Such a traumatic experience made pooch more cautious and frightened from there on out. Every night that he slept, he dreamed of that massive booty being planted on top of him again. Cutting toots, grinding down, smothering him in pure stink.

Through all of this, it wasn't the being sat on part that conflicted the Pooch, nor was it the noxious farts. It was the fact that he was dominated by a male. Oh boy what a male that Zorua was. Poochyena never knew how captivating another male could be, especially one with such a well rounded butt. It was quite remarkable how prodigious it was, fascinating even. Looking back at that event, it wasn't so terrible after all. In fact it was a virtue to have been in the presence of that wonderful Zorua. No. NO! What was he thinking! That Zorua was a male! How could the pup be enamored by a male, he's supposed to be after females! Every waking moment, his mind argued back and forth over this matter. He shouldn't be so enticed by a male, but on the other hand, that Zorua was quite divine.

Weeks had passed since the incident, weeks of the Poochyena internally conflicting with himself. Eventually, he was able to make a conclusion. He didn't care that the Zorua was male. He didn't care if it was wrong of him to think that, that Zorua and his fat ass was positively fantastic! Now whenever the pup slept, he no longer had nightmares of being smothered by a Zorua butt, but delightful dreams of being embraced by such an illustrious being. The Poochyena would squirm and moan in his slumber, sniffing the air as if he were still beneath those haunches and every morning he would wake up disheartened by the fact it was only a dream. Now there was only one thing on that Poochyena's mind. He NEEDED to find that Zorua again. He NEEDED that ass on top of him again, for even longer this time!


One morning when he woke up, the pup decided he would search for that Zorua. Deep down, the pup believed him to be his perfect match. He wandered deep into the woods, searching for just the slightest sign of that big booty one. He called out for the Zorua, making sure he checked the trees, checked behind rocks, checked around other pokemon and checked inside piles of brush all to no avail. For days Poochyena had been searching tirelessly for his playmate and for days he had gone to sleep at night disappointed. Would he never see that Zorua again?

The pup was up for another day of expected disappointment. He did the usual routine, calling out to the Zorua and checking every corner. So far, it was just as expected, nothing. The Poochyena started whimpering, he couldn't bear to be without the Zorua back in his life. His fantasies were filled with Zoruas image and made him crave the presence of him more. His head hung low with pity, until he heard the leaves of the bush near him start to susurrate. Was... was that him? The Poochyena leaned in close to the bush.

A quick grey blur shot out from the bush and tackled the Poochyena to the ground. It was the curvaceous Zorua in all his smugness. The pooch smiled ear to ear seeing his soulmate on top of him. There was so much he wished to tell him! He wanted to tell him how much he missed him and he wished he could have been able to appreciate him when they first met and how much he wanted him in his life, but he was lost for words. He could only lay there with that big dumb smile on his face, but he need not say anything for his face said everything for him.

The Zorua snickered. "I've been following you around since we last met little pup." the Zorua stated. "Guess you haven't had your fill of me yet considering you've been looking for me for weeks!" The Poochyena remained hushed. He couldn't believe the Zorua had been around him all this time hiding in the shadows. The Zorua snickered again as he turned around and pointed his grand flanks to the Poochyena once more.

The pups eyes lit up with excitement. His heart began to race a hundred miles an hour seeing that magnificent pair of mountainous fur and flesh standing above him again, even bigger than he had remembered. Only one thing was on the pups mind: SIT ON ME! SIT ON ME! PLEASE, PLEASE SIT ON ME! The Zorua let the poor pup wait no longer and dropped his gigantic ass atop his face. All light for the pup was blocked out by the tremendous stature of the Zorua's keister. The Poochyena snuggled right into the crevice, nuzzling against the inner walls of the buttocks to truly show his appreciation for the Zorua and his extraordinary derriere. The Poochyena finally understood now, this was his home. This was where he belonged. He needed absolutely nothing else in the entire world. As long as he remained encompassed in this beautiful bum, he was content.

"Heeheehee!" Zorua chuckled deviously. He had broken the pup's mind like a twig. He grunted and treated the Poochyena to a nice: PPRRRRRFFTT! right in his face to which the Poochyena scrambled to breath in, not wanting to miss a drop of the Zorua's stink regardless of how badly it burned his senses. He CRAVED those farts. Anything produced from this lovely butt was a blessing and the Zorua was more than happy to give the pup all the gas he desired, for he would never leave his rump again. The Poochyena would remain betwixt the fat cheeks until the end of time, breathing in endless streams of Zorua farts. He would never evolve, he would never again see light, nor would he remember his life outside of the cheeks, but none of that mattered to him. That butt was his life.