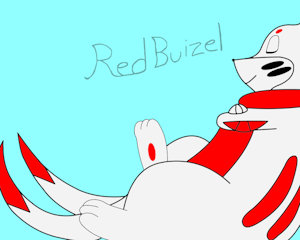 Revision of Vydra
by RedBuizel
JournalsSee All
Character gets personalized
I will be doing a vote on Facebook to create a complete and original name for my fan character. RedBuizel will now be my "artist" and not the character.
5 years, 8 months ago
Clean vs. Naughty
All my clean art will be public while my naughty or (nsfw) art will be for members only.Journals such as the one I'm writing now, will be public as well. All my art will eventually make it to e621 and...
6 years ago
SFL (single for life) club!
Welp I'm single again, but meh their lost. I didn't really felt hurt by them leaving. In fact, I see myself more productive lately ever since. Shame on me for not leaving sooner after they cheated on ...
6 years, 3 months ago
show original thumbnails
GallerySee All

A letter from pet Brixx

What a cutie (colored)

What a cutie (Outline)

Art I created
Any and all of my awesome artwork goes here.
9 submissions
FavoritesSee All

Over the clouds
by OnyKR

*C*_Disposing of the nuisance
by Fuf

I started my furry life back in May 30, 2014, right after my high school graduation with my first Facebook account at the age of 18. I met lots of other furries along my journey. Many of which I regret meeting and some I became very close to. I left that life and the community on March 26, 2016 at the age of 20, due to social media drama and constantly being hurt by my close friends. I abandoned the Facebook account without any warning and but I returned to it a year later. I no longer consider myself as a furry. I became an anime fan, I also no longer seek long-term relationships or distant relationships. I am more or less the "friends with benefits" type now until I feel like I am ready to settle down. I DO NOT plan on having kids or getting married until AFTER the age of 30, that way I can have fun while I'm young then settle when life slows down a bit. I continued my career as an artist as well. Doing more commissions, learning new art techniques and medias in collage such as sculpting, model drawing, traditional, and digital. Despite my skill set, my major is game design and development. In my training I've learned sprite sheets, character design, level design, background art, animation, coding, sound production, music production, and programming. I can basically fill any game design position. I am proud of what I've become and what I can do as a muti-media artist. If you like to be involved in my life, check on my YouTube channel I post game related videos sometimes funny stuff as well. Find me on PlayStation, I play mostly co-op games, or ask for my number so we can text each other, if you can't, don't push yourself I have telegram and Twitter. Be sure to say that you are an InkBunny user so I can be sure to accept your requests.

Role plays in stories, battles, and yiffs. All are welcome just ask.^w^ Also do crossovers by using Dragon ball Z or Naruto moves. (mostly water-style) Has the attitude of Vegeta (DBZ) and fighting style of Kisame Hoshigaki (Naruto). Also has a power level of 1.576 million super saiyan 2 (ssj2)

Swift (the user swings their tail, creating 5 star-shaped energy balls that homes in on the target, this move never misses)

Water Style: Water Shark Bomb Jutsu (The user shapes water into the form of a large shark, and thrusts their hand/paw forward sending it towards the opponent. The shark moves at high-speeds and creates a powerful impact. The user can also ride inside the water shark to increase their swimming speed in large bodies of water)

Instant transmission (fastest teleportation, nothing can stop this move, not even time control)

Water Style: Water Dragon Jutsu (This jutsu shapes a large amount of water into a giant, powerful dragon, which hits the opponent with formidable might, dealing physical damage. The ideal place to use it is near a body of water, but if the user's skill allows it, it is possible to use it even in a place where there is none)
Links and Contact Details